A number of people have heard of AA in one way or another, no matter whether it be in passing or whether they have prior knowledge on such meetings in particular. AA (also known as alcoholics anonymous) is “an international fellowship (of men and women who have had a drinking problem) that is nonprofessional, self-supporting, multiracial, apolitical, and available almost everywhere. There are no age or education requirements, and membership is open to anyone who wants to do something about his or her drinking problem.”

In turn, AA has a number of benefits which allow individuals who are struggling with alcohol addiction to get the help they need. One way that it is able to do this is by creating community between a wide range of people who are all working towards a common goal. People are then able to uplift and encourage one another as they share in similar struggles. Through these types of support groups each person is reminded of how he/she doesn’t have to go through his/her addiction alone. This is especially good for those who don’t feel comfortable talking about their addiction to a big group of people but instead allows sensitive issues to be discussed in a much smaller setting. 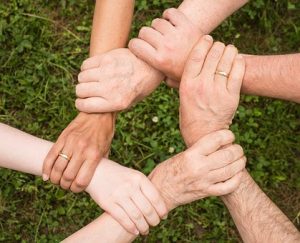 In addition, those who are trying to undergo the aftermath of alcoholism on their own are able to instead be surrounded by others like them who want just the same. In fact, the program begins with “the admission of an inability to control his drinking, a readiness to review his own shortcomings, and a willingness to make amends toward others whom he’s hurt by his actions.”

As a result, AA (and/or alcoholics anonymous) is nothing other than beneficial for those who are unsure of where to start. With such they can make a huge step towards recovery that they may not get the opportunity to do elsewhere. Not only that, but they can exchange experiences and advise one another in comfort and confidentiality without fear of being judged by others. This eliminates the feeling of loneliness and/or isolation that a number of addicts feel on a daily basis in being dehumanized because of their addiction.

In conclusion, family member, friend, no matter who it may be struggling with alcoholism they should never feel afraid to the point in which they forfeit the opportunity to find community in something as life changing as AA. With just one step they may find themselves a whole lot closer to healing and an alcohol free life.